Taijitu as a mnemonic for LuoShu

While the LuoShu (3×3 magic square) is simple to memorize by itself, one visual trick to remember the layout of the nine numbers is the Taijitu (yin-yang symbol). Write down the numbers from one to nine following the swirling pattern then exchange two and eight.

One to four belong to the shadow, while six to nine are on the sunny side.

Posted in China, Square, Taijitu | Comments Off on Taijitu as a mnemonic for LuoShu

SHALL WE PLAY A GAME?

Posted in Ceremonial, Tarot | Tagged mahjong tiles, tarot cards, Triangular numbers | Comments Off on SHALL WE PLAY A GAME?

Friday is for Frida

The Old One and the Fisherman’s Wife

Meanwhile in Japan, Hokusai in his old age used to sign 画狂老人卍 (Gakyōrōjinmanji). His life long production of painting covers every genres and subjects, like nyotaimori. 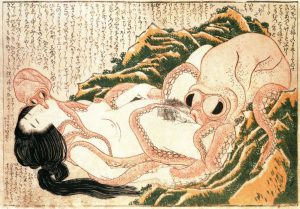 Posted in Japan, Tentacles, Wànzi | Comments Off on The Old One and the Fisherman’s Wife

An Octopus with a Nose Ring

If the idea of having a swastika part of a Kanak charm against creatures from the deep seems strange to you, let me take you for a trip along the coast of Panama.

There, the Kuna indians live on a group of 365 islands off the coast of Panama. They assumed autonomy in 1925. The flag design they adopted at that time incorporates a swastika. Later a variant of the original flag was introduced where a circle representing a nose ring was added.

In Kuna tradition, kikir, which means octopus, is the name of the sacred symbol representing the birth of the world, the divine mother extending its tentacles in the four cardinal directions thus creating the rainbow, the sun, the moon and the stars.

PS: I like the idea of being able to spend each day of the year on a different island and on leap year to have a rest on the mainland.

Posted in 365, Tentacles, Wànzi | Comments Off on An Octopus with a Nose Ring

Of a Charm against Creatures from the Deep

“Well, come abaout thutty-eight – when I was seven year’ old – Obed he faound the island people all wiped aout between v’yages. Seems the other islanders had got wind o’ what was goin’ on, and had took matters into their own hands. S’pose they must a had, after all, them old magic signs as the sea things says was the only things they was afeard of. No tellin’ what any o’ them Kanakys will chance to git a holt of when the sea-bottom throws up some island with ruins older’n the deluge. Pious cusses, these was – they didn’t leave nothin’ standin’ on either the main island or the little volcanic islet excep’ what parts of the ruins was too big to knock daown. In some places they was little stones strewed abaout – like charms – with somethin’ on ’em like what ye call a swastika naowadays. Prob’ly them was the Old Ones’ signs. Folks all wiped aout no trace o’ no gold-like things an’ none the nearby Kanakys ud breathe a word abaout the matter. Wouldn’t even admit they’d ever ben any people on that island.”
…

“We all hed to take the Oath o’ Dagon, an’ later on they was secon’ an’ third oaths that some o’ us took. Them as ud help special, ud git special rewards – gold an’ sech – No use balkin’, fer they was millions of ’em daown thar. They’d ruther not start risin’ an’ wipin’ aout human-kind, but ef they was gave away an’ forced to, they cud do a lot toward jest that. We didn’t hev them old charms to cut ’em off like folks in the Saouth Sea did, an’ them Kanakys wudu’t never give away their secrets.
“Yield up enough sacrifices an’ savage knick-knacks an’ harbourage in the taown when they wanted it, an’ they’d let well enough alone. Wudn’t bother no strangers as might bear tales aoutside – that is, withaout they got pryin’. All in the band of the faithful – Order 0′ Dagon – an’ the children shud never die, but go back to the Mother Hydra an’ Father Dagon what we all come from onct … Ia! Ia! Cthulhu fhtagn! Ph’nglui mglw’nafh Cthulhu R’lyeh wgah-nagl fhtagn – “
Posted in Tentacles, Wànzi | Tagged Cthulhu, Lovecraft | Comments Off on Of a Charm against Creatures from the Deep